GoAnimate understands the value of video, but the time-consuming and costly nature of high-quality content creation was enough to put most people off. GoAnimate was inspired to come up with a quick, simple and cost-effective tool for producing creative, high quality and professional videos.

GoAnimate grants everyone from businesses to educators the cloud tools required to build custom animated videos from scratch. With 1000s of characters, effects and drag-and-drop tools on offer, publishing videos has never been easier.

After Effects CC vs GoAnimate

Movavi Video Editor Plus vs GoAn...

GoAnimate currently scores 79/100 in the Video Editing & 3D category. This is based on user satisfaction (90/100), press buzz (66/100), recent user trends (falling), and other relevant information on GoAnimate gathered from around the web.

GoAnimate is a cloud-based animation platform that is easy to use. Users do not need to have any prior design or animation skills to make use of this software product and, as it is a web-based platform, people are able to make use of GoAnimate on their computer anywhere as long as there is an internet connection. In addition to being an intuitive affair, the software product also gives a step-by-step tutorial on what the users need to do in order to use GoAnimate. More often than not, users are able to create their own short animated video within minutes after using a tutorial.

Companies are able to use GoAnimate as a new way to market products or services using videos. From small businesses to large enterprises, the software product has been shown to be scalable and flexible to the needs of a wide variety of enterprises. Aside from businesses though, GoAnimate also offers programs for government agencies as well as schools. It offers a well-rounded option for companies that choose to try their hand at creating animated videos instead of downloading other software solutions and then spending time and resources in order to learn how to use them. 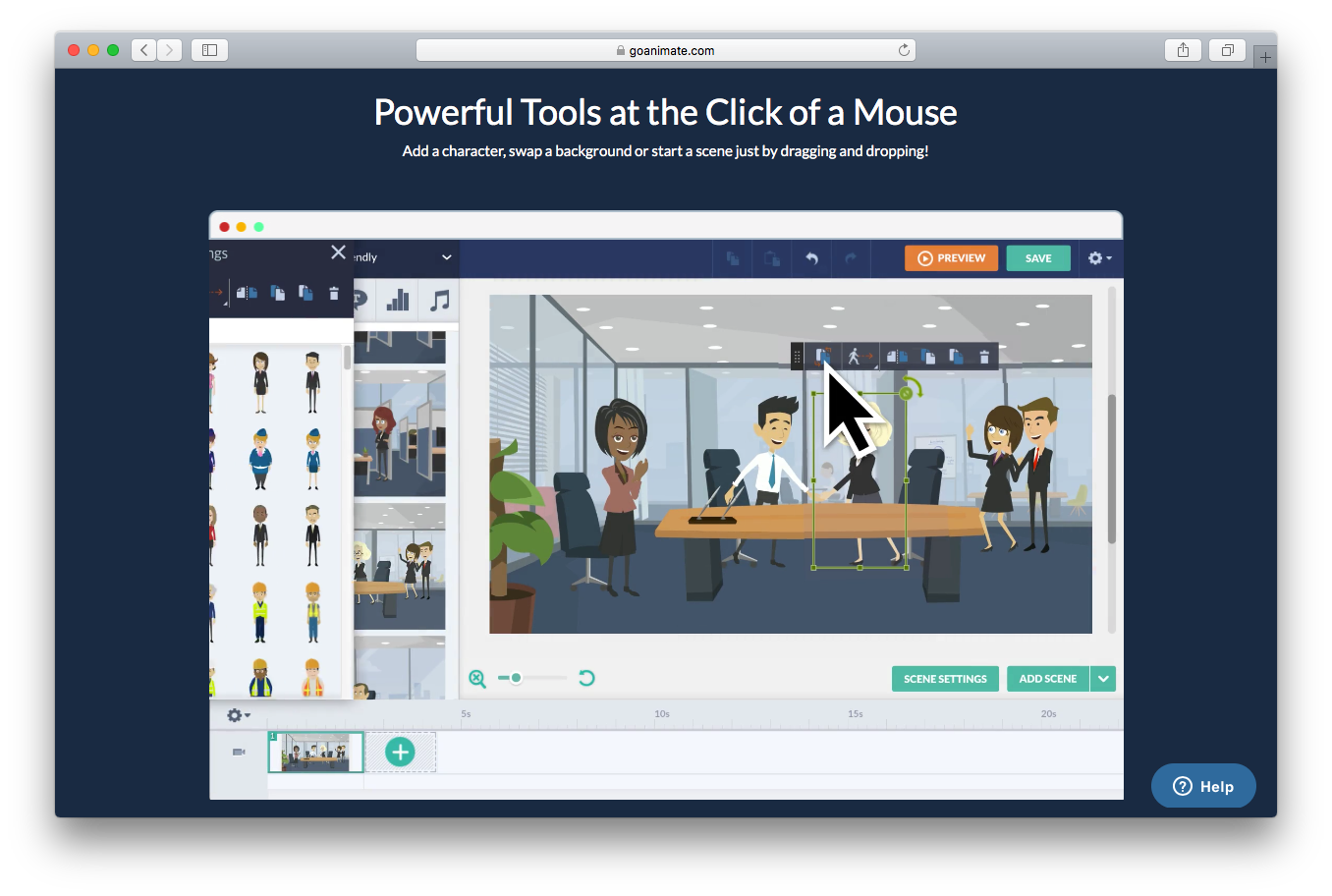 Interested users of GoAnimate first need to sign up. The platform allows users to register for a 14-day trial in order to get started. The free trial already gives a lot of options. Note, however, that the trial only allows users to share videos. The demo also doesn’t allow them to download or export the said media.

With the trial, users are able to choose a theme which best suits the needs for their animated video, and afterward, they are able to drag and drop their preferred background from the GoAnimate selection.

Users are then able to modify the background. For example, if one were to choose a background that features an office pantry, they can remove certain appliances in the background as well as make more of them or change how big they are. After the user is satisfied, they can then add characters. GoAnimate also has a wide selection of characters of a different race, age, and gender and aside from the pre-made templates, users are also given the ability to create their own custom characters.

GoAnimate allows users to animate these characters. A bevy of animations is possible, such as walking into and stepping out of the camera’s field of view or making use of things in the background like turning on a microwave or picking up pieces of paper on the floor, which are just some of the wide array of actions users can give the characters. For dialogue, users are able to add “voices” in the form of sound files. These can be uploaded to the library of the user’s account, or if they want, users may also use a microphone to record their own dialogue using the bundled microphone tool.

Aside from being able to guide step-by-step how the animated video will go, GoAnimate also allows the users to choose from pre-built sequences that have selections on how they might want your animated video to flow. After the video itself is done, users are able to download the output (for those who have subscribed to a pricing plan) or share it to other partnered websites like YouTube. GoTeam subscribers can convert the video into an animated GIF.

With GoAnimate, companies that wish to create quality animated videos for their needs no longer need to get someone with a degree in animation. The software product itself does most of the heavy lifting and the platform is fast and intuitive. The platform offers a large assortment of tools that give users the ability to choose exactly what they want, whether it be choosing from the multitude of templates that GoAnimate provides or importing ones yourself.

A main feature of GoAnimate is the ability to import the user’s own content. As a result, it is easy for them to make use of sounds and images they’ve already created, as well as any marketing content users can fit into the video. Aside from importing data, there is also a large collection of sounds, backgrounds, characters, and props customers can use.

The software solution uses absolutely no space on the hard drive as it is 100 percent cloud-based and no program downloads are necessary either. Users are able to continue working on certain projects from anywhere as long as there is a computer with an internet connection. Many of the time-saving properties of GoAnimate stem from its embedded intuitive and streamlined process. For example, when creating another scene for the same video, GoAnimate copies the previous scene as is, ensuring a smooth transition in between, eliminating the time needed to recreate the previous scene’s ending.

The best feature of GoAnimate however, is how anyone can use it. Whether this is the first video the user creates or even if the user is already a professional when it comes to animation, GoAnimate is a useful software product for all skill levels.

After the 14-day free trial ends, users have to upgrade to one of the GoAnimate subscription plans.

With this plan, users are able to download videos up to 720p and produce an unlimited number of videos. Also included are an unlimited amount of downloads or exports and users are able to directly export videos to YouTube and other partnered websites. GoPublish also allows users to import audio, images, and video files and comes with 40 premium music tracks. Animated videos created by users with this plan also have the GoAnimate logo at the bottom left.

Aside from all the other features GoPublish provides, users are also able to download full HD videos at 1080p and have the ability to remove the GoAnimate logo from their published outputs. The amount of premium music tracks also goes up from 40 to 70 and users are able to access live chat support on weekdays from 6 a.m. to 5:30 p.m. Los Angeles Time.

Aside from the features that are in GoPremium, with this plan, users are able to work in teams. If users were to get more seats, GoAnimate has discounts depending on how many you want to include in this plan. GoTeam users will also be given a higher level of priority when sending inquiries and aside from the normal security encryption the software solution places on the videos, subscribers of this plan are also be able to password-protect any published outputs.

GoAnimate makes video animation creation easy. The fact that it requires no software download at all is an advantage for those who work from multiple sites. When compared to actually hiring a full-time animator, this solution saves a lot of money. If companies need a software solution anyone can use, but also provides a new, engaging way to interact with their customers using video animation, GoAnimate fulfills this need.

Average User Rating:
4.52/5 based on 9 user ratings.
Your Rating:
Write a review

Yes, I saw some japanese was making so i want to try it!Can you give me the permisson.

What do you dislike about GoAnimate?

I don't have dislike, I like this app atually im not jk or something,i really want to try it.

What have you been using it for and what problems did GoAnimate solve?