The United States is still largely unrivalled with 63% of companies globally and nearly 89% of the startup funding in the cloud and software sectors. However, as the US market is becoming more saturated US vendors are increasingly looking to expand into Europe and Asia.

Europe, a distant second, is showing increased velocity with a great number of emerging companies focussed on the space. In 2017 it was home to 22% of the world’s cloud companies, but only 5% of funding.

Silicon Valley - home to 16% of the world’s cloud and software companies - remains the ultimate powerhouse with nearly 39% of the world’s funding and rapid growth rates. It is followed by New York, Southern California and Boston.

London (5th) and Tel Aviv (8th) are the only non-US clusters in the top 10, driven by their SaaS startup movements.

Crozdesk analysis has found that in 2017 62.79% of relevant companies worldwide were located in North America (United States 59.57%, Canada 3.22%). Europe followed with 22.28% of worldwide records. Funding patterns and overall development of both regions will be analyzed in more detail in subsequent sections of this report.

For regional comparison, records have been clustered in areas of significant velocity and companies have been consolidated to their headquarters location. In some areas, such as the Texas Triangle (Dallas, Houston and San Antonio) and the North West Cluster (Seattle, Portland and Vancouver), the editorial decision has been made to bundle them into one cluster due to their shared investment and business infrastructure.

Outside of North America and Europe, Israel and its hub Tel Aviv have shown significant traction in its SaaS development and come in at 1.93% of records, followed by Bangalore at 0.95%, New Delhi at 0.78%, Sydney at 0.78% and Singapore at 0.76%.

While Brazil (1.14%) and China (0.99%) are showing increased interest in the space they are still lagging behind. However, early signs of increased focus on SaaS and enterprise software are visible and are bound to lead to increased growth in both countries as their economies mature further. In the case of China, total funding of companies in the sector has increased to 2.17% of the worldwide share and IaaS is deemed to become a major driver of growth in coming years.

Regional cluster development is largely driven by proximity to traditional industry across a wide range of sectors (e.g. Manufacturing, Finance and other service industries) and proximity to funding sources such as Venture Capitalists, Angel Networks and trade investment arms of established enterprises.

This clustering trend can be better understood by looking at the next section of this report, which covers funding patterns in relation to investor location across the United States in more detail.

In the next two sections of this geographic analysis we will take a deeper look at funding and overall company growth in the United States and Europe, which are driving forward the cloud and software economies with over 85% of cloud services and enterprise software companies worldwide.

The following analysis assesses the relative abundance of capital and debt investment in North American SaaS, PaaS, IaaS and enterprise software businesses by state and looks at the overall growth by geographic cluster. Growth is defined as a function of company records and expansionary metrics (employees and funding per company). The analysis included 12,048 North-American businesses.

Sample companies based in California raised funding amounting to $58.74B since their incorporation, which constituted 43.69% of global funding into the sector. This is followed by New York State with $11.59B and Massachusetts $11.39B. Illinois with $4.75B is closely followed by Texas at $4.74B and Washington State at $4.04B. 13 US states and one Canadian province (Ontario at $2.10B) were home to companies with a total of more than $1B in equity and debt capital.

The largest US tech clusters by headquarter location are Silicon Valley at 16.14% of the world’s companies operating in the space, New York at 5.67%, Southern California at 5.11%, Boston at 4.20% and the North West Cluster (Portland, Seattle and Vancouver) at 3.51%. Other interesting clusters include the Washington DC / Arlington (VA) metro area with 1.88% of records and the fastest average company development of any cluster measured. Chicago and Denver at 1.80% and 1.73% respectively are two areas of increased velocity in current SaaS development.

A recent Crunchbase study has found that, in the US, 66% of Angel and 58% of Venture Capital deals happen in the investors’ states of residence. In Silicon Valley this is even more extreme. San Francisco Bay Area investors invested in Bay Area companies 66.2% of the time.

By and large, investors on the the west and east coasts tend to overlook the midwest and south of the country when they invest outside of their own region and opt for the opposite coast instead. For instance investors from the north east of the country tend to invest in west coast businesses 34% of the time and only 3% in midwest businesses. This further fuels the mismatch of funding and infrastructure. West Coast investors keep their investments within their region in 78% of cases and skip the heartland to invest in north eastern businesses 14% of the time.

While there is a slowly declining trend related to this, it illustrates the relative mismatch of funding and explains the continued cluster growth of growth hot spots on the west and northeastern coasts of the country.

The following analysis assesses the relative abundance of capital and debt investment in European SaaS, PaaS, IaaS and enterprise software businesses by country and looks at the overall growth by geographic cluster. Growth is defined as a function of company records and expansionary metrics (employees and funding per company). The analysis included 4,276 European businesses.

The European cloud services and software economies have been dominated by the United Kingdom - home to 6.42% of global companies in the sector and $2.34B in funding within the sample group. 65.37% of UK cloud services and software companies are located in the Greater London area operating with 73.16% of the country’s sector funding. The UK ecosystem has grown steadily in recent years and SaaS has become one of the primary drivers of startup growth, rivalling its still dominant FinTech sector.

While London has a large SaaS ecosystem it can’t keep up with its US counterparts in terms of funding and growth opportunities. For instance, the average funding round of London-based companies was just one quarter the size of their San Francisco-based rivals. The median round size was $654,500 - in comparison to $3M in San Francisco.

Consequently, this likely caused the average growth speed of London companies in the sector to just reach one third of that on the US west coast.

Despite much higher impediments to growth and opportunity in the European cloud services and software space, smaller ecosystems with heavy focus on SaaS and BPaaS have been popping up all across western, central and northern Europe.

The Amsterdam area and surrounding territories in the Netherlands have shown significant interest in SaaS, PaaS and enterprise software. The extended cluster comes in at 1.15% of companies, however, with less funding at only 0.30%.

The fastest growing areas outside of London were Cambridge, Paris, Oslo, Berlin and Barcelona.

Spread across Eastern Europe, an increased number of startups have appeared in recent years, but with little access to capital and growth opportunities within the sector.

All in all, Europe has exhibited significant interest in SaaS, BPaaS, PaaS and enterprise software, while its IaaS sector has been lead by a small selection of established players. However, more conservative investment practices and less venture capital have made it difficult for European businesses to keep up with the fast growth exhibited by US competitors.

You can find a quick summary of the main findings in the infographic below. 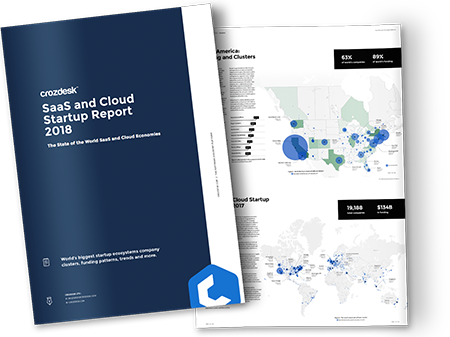