Create and manage your data model:

Back4App scored 84/100 in the Development category. This is based on user satisfaction (88/100), press buzz (43/100), recent user trends (rising), and other relevant information on Back4App gathered from around the web.

USB to Serial Converter vs.

Back4App is a development tools software solution designed for web application designers and software developers. It provides a quick and easy way to build, host and manage your applications on one single platform. The solution is especially useful for developers and designers who have been using the open-source Parse Server to manage their apps.

Back4App is a hub, a centralized platform for backend and application program interfaces or APIs. With this solution, users can easily focus on designing and building apps that enhance user experiences instead of worrying about complex infrastructure. They can create as well as host APIs for web and mobile applications and the internet of things (IoT) up to 80% faster.

The platform makes use of the Parse open-source framework to provide users with the efficiency and functionality they’ve come to expect from such a service. If you have been working with Parse open-source server and wish to migrate all your data into a safe and competent platform, Back4App is the right software solution for you.

Parse users can appreciate the fact that Back4App is designed and built with the Parse server and database structure in mind. It comes with a specially designed wizard to help make the migration process of all your data a lot quicker and easier.

Back4App also uses the Parse server infrastructure to run and manage backend applications. This means you don’t have to start from scratch with figuring out how the service works or rebuild your app from the ground up. By using the platform, developers and designers won’t have to invest extra effort during the app migration process. They can move all their data to Back4App quickly and easily.

Developers don’t need to rewrite or make significant changes to their applications to integrate them into another API, especially since Back4App utilizes the same API as the Parse server. All you need to do is change the API server address and that’s it. The platform also allows users to access and download all the migrated code at any time and run it locally on any server of their choosing.

The benefits conferred by Back4App

Back4App offers a wide range of features and capabilities that developers can truly appreciate, especially those who work with and are familiar with the open-source Parse server. On top of the open-source framework, Back4App is a fully hosted backend-as-a-service platform as well. The hardened Parse makes the software solution easier to use and allows businesses and organizations to scale their applications without the server hassles normally associated with the process. 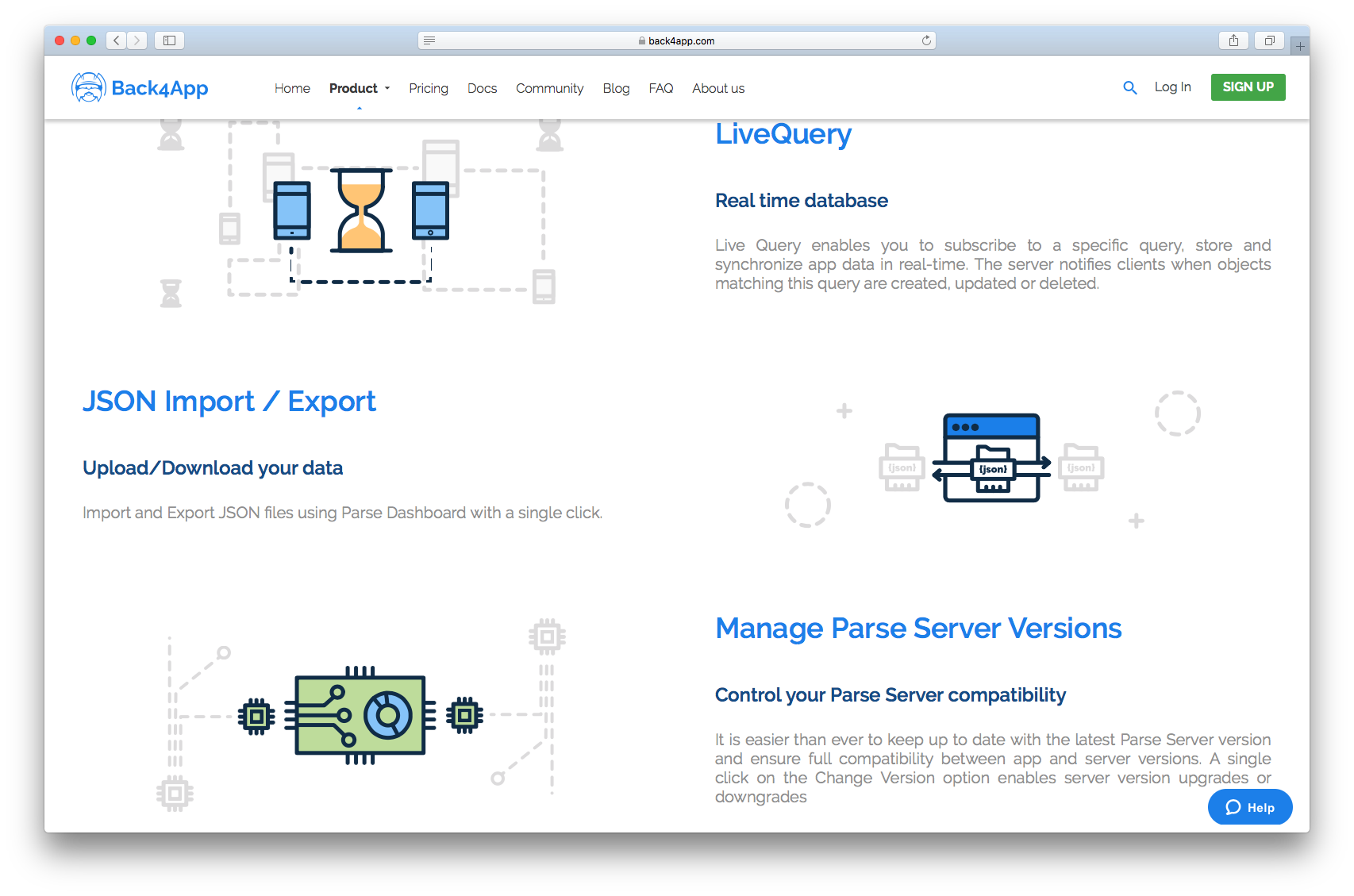 The LiveQuery feature that comes with the Back4App platform allows users to subscribe to any specific query while being able to synchronize application data in real-time. The server instantly sends out notifications to clients whenever objects matching their query are created, uploaded or deleted. It’s quite a useful feature for notifying clients immediately when any app data has been modified or changed.

Web and app developers will have more control over their Parse server projects and not have to worry about compatibility issues. This is one of the best things about the Back4App software solution, it is way easier now to keep up-to-date with latest technologies and Parse server versions to ensure full compatibility between the server itself and the apps you are developing. With a single click of a button, you are able to perform server version upgrades or downgrades.

Scale the software solution to match your needs

Back4App is designed with an emphasis on auto-scaling. It is built to grow with your business or organization. And with scalability in mind, you have app developers and companies, both big name brands, and the smaller ones, entrusting their data, login information and everything else to a single high-performance secure platform.

MongoRocks is a storage engine designed for MongoDB based on the RocksDB storage engine developed by Facebook engineers. The engine is designed to handle write-intensive workloads and it combines the scalability of MongoDB and the raw performance of RocksDB. MongoRocks was built to support Parse’s workload.
Back4App utilizes the MongoRocks engine to take advantage of its far superior performance, greater efficiency and rather powerful backup capabilities. This particular feature greatly benefits developers working on write-intensive workloads.

Back4App offers versatile pricing that comes in five different packages, not including the free service that provides users with 500 MB database storage, 5 GB file storage, up to 10 requests per second, up to 10k requests per month and 1 cloud code job. This free plan is ideal if you want to try out the software solution before you purchase a specific package. Check out the following pricing plans to see which one fits your needs best.

Intermediate $34.99 – Ideal for scaling up your capabilities

Advanced $99.99 – The plan for small- to medium-sized businesses

You may also choose to throw in a few extras to your chosen pricing plan, such as an extra 1 GB of database storage for an additional $15 per month, additional Cloud code job for $10 per month and 10 additional requests per second for $100 a month. You may visit the Back4App official website for more information about the platform and the pricing. 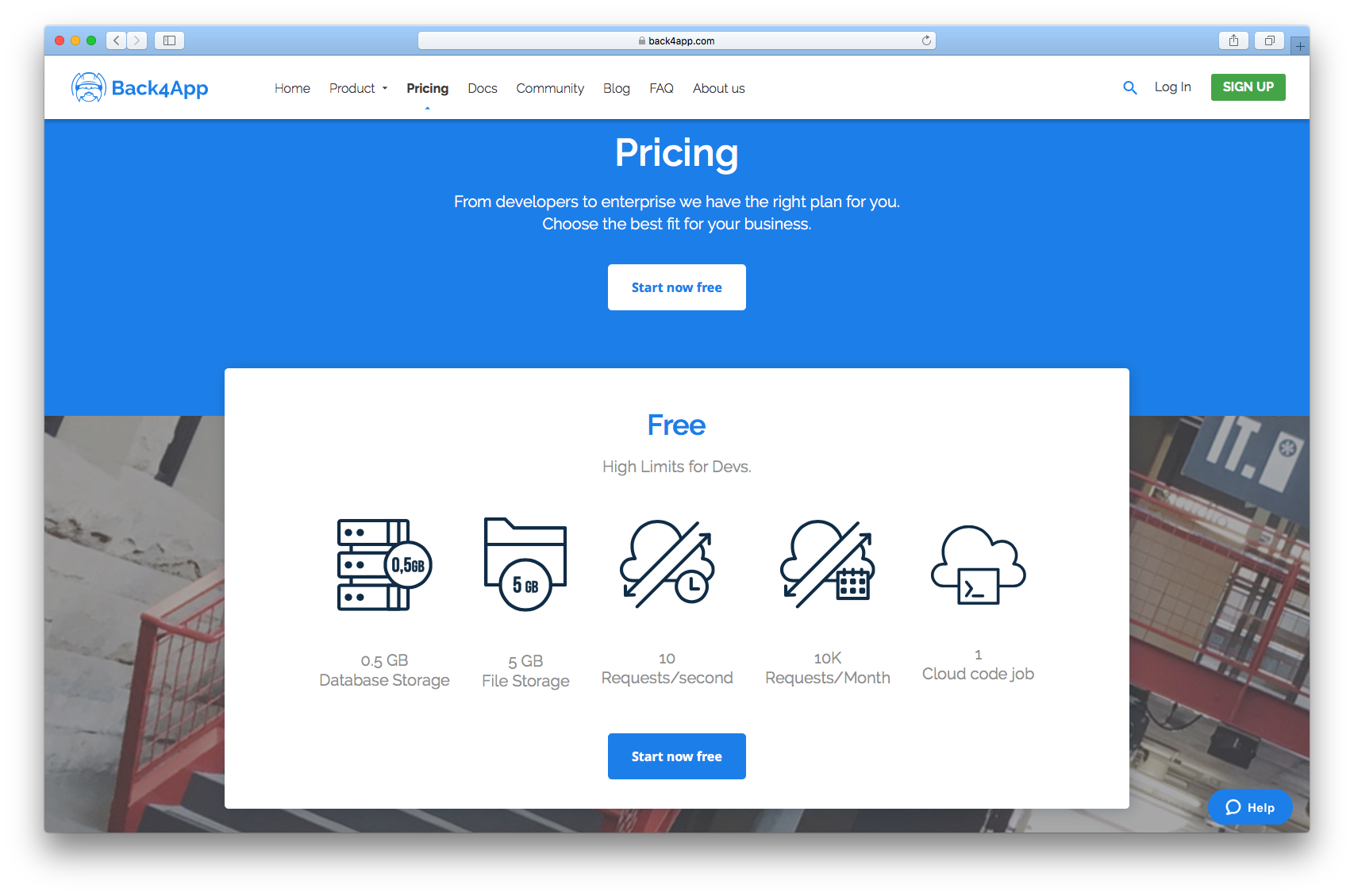 With Back4App, application developers and designers can build and tweak their apps faster and more efficiently without sacrificing full control over their backend. The platform delivers an open-source and user-friendly solution that allows users to build, host and manage their projects with ease.
The pricing on the various services offered is quite affordable and competitive as well. The packages are definitely tailored towards small startups and SMBs looking to develop, host and manage their apps without the need for budget hands. If you’re looking for an affordable, secure and reliable Parse server platform that works efficiently well, you should give Back4App a try.

Does Back4App offer guides, tutorials and or customer support?

Support via email and chat.

What platforms does Back4App support?

What is Back4App generally used for?

What are some applications Back4App is commonly used in tandem with?

Back4App is commonly used in tandem with general mobile apps, games and we apps.